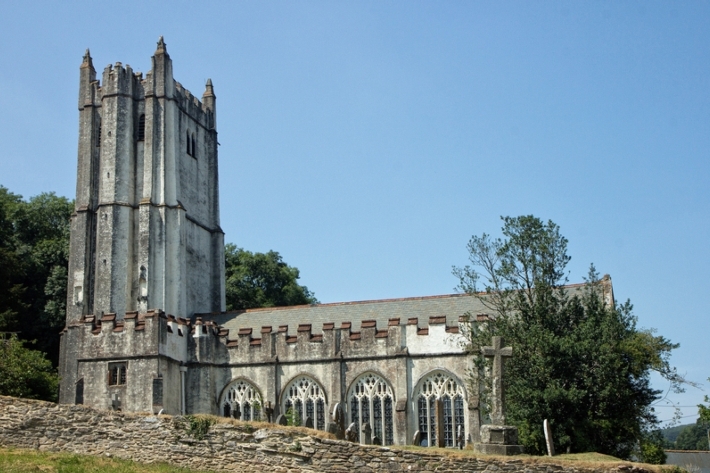 ‘Ipplepen with Torbryan’ is a single ecclesiastical parish with two churches.

The church of Holy Trinity, Torbryan was made redundant over 30 years ago and is now owned and managed by the Churches Conservation Trust

Occasional services are held at Torbryan.

The approach to this church, through typical narrow Devon lanes to an isolated and wooded valley, does not prepare you for a building of such size and grandeur. The church is a perfect example of the Gothic Perpendicular style and was unusually constructed in one 20-year building campaign between 1450 and 1470. The superb, soaring tower rises in three stages, and has an octagonal stair turret which forms a dramatic architectural feature. As you enter look up at the exquisite and rare fan-vaulted ceiling with four small angels supporting the central ribs of each fan. Inside there is a beautifully carved altar screen that spans the width of the church, dividing the interior with its graceful arches. Below ithe screen are painted panels of 40 saints – they were once whitewashed, perhaps to save them from the puritanical zeal of the Reformation. The delicacy of the wood carving is echoed by the elegant tracery of the windows, many of which contain Medieval stained glass. Parts of the original rood-screen were reused, probably in the early 19th-century, to form the pulpit, while at the same time the original pulpit was reconstructed as the altar. The 15th-century oak benches survive but were enclosed in the 18th-century to form box pews.

Torbryan has an ancient peal of 4 bells

The tower at Torbryan, and at least one of the bells, is older than the rest of the building. The ringing world acknowledges that the third bell has as pure a tone as any bell in the kingdom and although cast in the 15th century it has never been re-tuned, its note being perfect. The legend cast into the bell translates “In truth beneath the sky, there is no better bell than I”.

The treble and tenor bells were cast later, about 1500, while the second is a bit of a late comer at 1553 and its legend translates simply as “Mother of God, remember me”.

Despite their age, the bells are hung in a modern steel frame and are easy going. No-one who has rung at Torbryan could forget the experience. There is no electricity, the spiral staircase and ringing chamber are dark and the home of many bats, but the tone of these historic bells is deep and magnificent.

There is no regular ringing or weekly practice at Torbryan, but the Rector, or Ipplepen Tower Captain will give further details if anyone is interested. 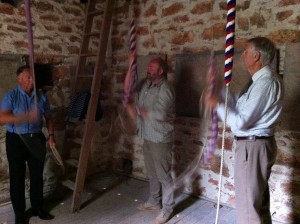 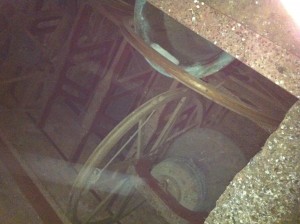 Click below for a 1930s article about the stained glass and screen paintings.

The following booklet contains some interesting information about Torbryan (click on the link below the picture): 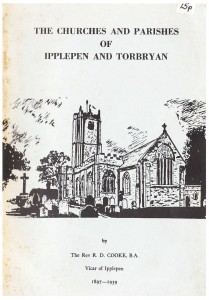 The Churches and Parishes of Ipplepen and Torbryan by Rev. R.D. Cooke, 1897-1939 (reproduced by kind permission of Fiona Muddeman, grand-daughter of Rev. Cooke) 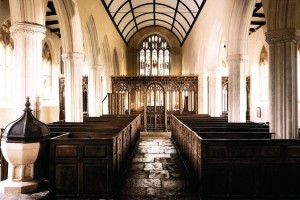 Press release on the recovery of the stolen mediaeval panels in 2015: 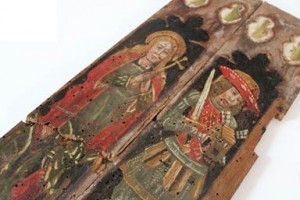 Two priceless 15th century oak panels, stolen from the rood screen of a Devon church in the care of The Churches Conservation in August 2013, have been recovered by the police.

The decorative oak panels, bearing paintings of St Victor of Marseilles and St Margaret of Antioch, are considered of national importance, and were stolen from Holy Trinity Church at Torbryan in Devon between 2 and 9 August 2013.  The panels remained missing until they were recovered by the Metropolitan Police Art & Antiques Unit after being spotted by a private collector in an online sale. This led to a raid by specialist detectives in south London in January.

The rood screen and its panels are one of only a handful of such artworks in England which survived the Reformation. The theft prompted a national media campaign to try to trace the whereabouts of the missing panels, receiving the backing of high profile figures such as Loyd Grossman, Dan Cruickshank and the late Candida Lycett Green. The collector who alerted the police recognised the panels from media coverage of the theft.

When it first came to light in 2013, the theft was a bitter blow for The Churches Conservation Trust, the national charity that cares for 347 unique churches around England including Torbryan church. Despite elation at the return of the panels, the Trust now faces a bill of £7,000 to restore the damage – the result of the thieves hacking the panels out of the screen during the theft – and has today launched a campaign to raise the money.

“The Churches Conservation Trust cares for 347 churches around the country, and the Torbryan rood screen is one of the highlights of this internationally-significant collection. The theft of these unique artworks from Holy Trinity was a real blow, so we’re delighted that they are now back in our hands.

“Unfortunately the damage caused as the thieves hacked them out of the church will cost a lot to put right, so today we have launched a campaign to raise the £7,000 needed to conserve them and repair the damage. Please give today to return these panels to Torbryan.  Just call 0800 206 1463 or visit http://www.visitchurches.org.uk/Torbryan/.

“The CCT is committed to displaying unique artefacts like these panels in their original setting and open to the public for everyone to see and enjoy. We now need to raise the funds to return these panels to their beautiful medieval church, in a tranquil wooded Devon valley that has remained unchanged for centuries”.

Eminent historian and TV presenter Dan Cruickshank, who backed the original campaign to find the stolen panels, also expressed his delight at the news, commenting:

“I’m delighted that these 15th century artworks – once feared lost forever – have been recovered by the police. The panels are irreplaceable examples of an important period in our art and history, and pieces like this help us to learn about who we are as a society. They should belong to everyone.

“It is a shame that the panels have been left damaged by those who hacked them out of the priceless rood screen but it is good news that that The Churches Conservation Trust has already launched a campaign to restore them, and return them to their rightful place in sleepy Torbryan church.”

West Mercia Police are now leading the investigation into the theft as part of Operation Icarus, which has also recovered a treasure trove of other church artefacts, including stonework, friezes, statues, paintings, brasses, misericords, stained glass and bibles. The police are appealing for help in identifying the artefacts, which include the misericords from St Cuthbert’s Church at Holme Lacy in Herefordshire, also in the care of The Churches Conservation Trust.

In response to the original theft, The Churches Conservation Trust conducted a thorough audit of security at Holy Trinity, Torbryan and a new alarm system is now in place at the church to protect its contents in future. A new scheme of interpretation is also being developed to explain the artworks and the history of this unique Grade I listed church to visitors.

Although the return of the panels is excellent news, they sustained significant damage during the theft, and members of the public are being urged to make a donation to The Churches Conservation Trust, in order to help restore them.Donations can be given on the telephone on 0800 206 1463 or online via http://www.visitchurches.org.uk/Torbryan/.

Read the conservation report on the panels by clicking the link below.

Note: “All references to the use of ‘tulip wood’ were based on a misunderstanding and that oak was used for the conservation joinery”.