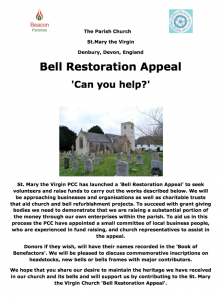 Read about our exciting new project and how you can help. Click on the link below.

Click on this link to donate money while you shop, at no expense to you:

Long before Churches housed large bells in specially constructed towers, small portable bells were a fairly common part of every day life. Certainly, if you lived in Denbury a thousand years ago you would probably be very familiar with a whole variety of bells. Portable bells have, down the centuries, played an important part in the religious and social development of our nation and while different towns and villages throughout the country might have had their own variations and customs, a great many common traditions existed and thrived throughout Britain and indeed into Europe and Denbury was no exception. It is safe to assume that Denbury was on one of the many Celtic trade routes. We know that a thriving community lived here throughout those centuries between the Romans leaving Britain and the Saxons coming in and the existence of ancient Churches throughout the area dedicated to Celtic saints confirms that. Travellers moving to and from Celtic Brittany en route to Wales, Ireland and Scotland were faced with the choice of scaling Dartmoor with its treacherous weather and bogs or going around it which they invariably did. In the church we have the statue of St Barbara a Celtic saint, given to us by a former Rector to remind us of our Celtic heritage.

Itinerant traders as well as preachers and evangelizers of the Church carried `handle bells` with rigid wooden handles to afford them protection on their journeys because it was believed that bells drove away evil as well as announcing their arrival in a place. People ridden with disease would often carry them too to warn of possible contamination if you strayed too near while the priest in parishes too poor to afford the installation of great bells in towers rang a hand bell to advertise the fact that he was there and mass was about to begin. And if you could not get to church a minor church official known as the Beadsman was paid to walk the parish ringing his handle bell to announce his presence. His job was to invite prayers, especially for the dead, the anniversaries of which fell at that time, while throughout the great ages of pilgrimage travellers often carried bells bought for a few pennies to show they were on a pilgrimage again in the belief that protection was theirs on their special journey; In the centuries preceding the reformation, each church was required to provide a bell suitable for ringing before a Priest carrying the Holy Sacrament to the housebound. Called the “Housling or Call Bell” it was usually small and its use was restricted to that use only, other bells being used for functions. Churches had bells for ringing in processions such as at Rogation tide when the Parish boundaries were walked and the land and crops blessed. During the time of the Plague or Black Death, the ringing of a bell often announced the arrival of the death cart along with the instruction to ‘bring out your dead!’ They were quite probably the same bells referred to in church terriers as “Lych”, “Forthfare” or “Corse” (corpse) bells, which for centuries were sounded by acolytes escorting a funeral cortège, an example of this can be seen on the Bayeux Tapestry, while “Sacring” bells sometimes referred to as “Sanctus” or “Saunce” bells were rung in churches from the twelfth century at the elevation of the sacraments, a tradition that we still continue in Denbury Church today. Unfortunately, most of these bells fell into secular hands or were wantonly destroyed at the time of the Reformation and latterly puritan Britain so very few of them remain and with them went the traditions they were forged for. In more modern years of course we think about bells as once being mounted on the roofs of police cars, ambulances and fire engines – much better than that terrible din they now emit I always think and of course telephone and doorbells now largely replaced by the ubiquitous chime or electronic ‘tune’. And so we come to today. There are not many applications for bells today but we still use them in the church to call people to Holy Communion, or prayer, perhaps to a time of celebration such as New Year, or a wedding, or sadly a funeral when the ‘Corse’ bell is struck every 30 seconds [one strike for every year of the deceased’s life prior to the funeral service] and in the evening of the same day when a muffled peal is rung, part in celebration of a life and partly to respectively mark the passing of that same life. In Denbury we do all these things; we have done for over 800 years in the current church and probably for a further 400+ in the Saxon church that preceded it. Over a thousand years of history and tradition, a responsibility we take very seriously.

The tower now contains five bells, one more than in the inventory of 1553. “Denbery iiij belles in the tower their” (Ellacombe, “Church Bells of Devon,” Appendix B). The oldest dated bell is the 4th, which is 1647 although we do know that one of the bells is mediaeval; I suspect it is the 3rd due to the fact that it is not dated while most of the others are and it has a different headstock mounting than the others as well. The legend on the Denbury mediaeval bell is among the six mentioned by Ellacombe, which occur most frequently on ancient Devonshire bells—

It has reference, in particular to the ancient belief, and which still survives in some countries, that there is a virtue in the sound of church bells to drive away storms. The legend on the bell is preceded by an initial cross of beautiful design (Ibid, cut 7). As many as 22 of these legends remain in Devon. They are generally known by the name of “Leonine,” ascribed by Dueagne to Leo, a 12th century poet, but by others as much earlier, and even traced to the third century, A.D. In 1829 Denbury church came into possession of a new bell, cast by William Hambling, of Blackawton, described by Ellacombe as “an ingenious blacksmith,” from whose foundry issued twelve bells for different churches in the vicinity of Blackawton from 1823 to 1845. We are told that he was much patronised by Archdeacon Froude, and was the last of our Devonshire bell founders. The inscription on this bell is:

“I to the church the living call and to the grave do summon all; 1829; Revd. R.H. Froude, Rector; Mr. Simmons and Goodley, Wardens; Prosperity to this parish; Hambling fecit Blackawton. Peace to the ringers of Denbury.”

Finally, we have a prayer in the ringing room to remind us why we are there:

We beseech Thee, O Heavenly Father, to pour Thy grace into the hearts of those who work for Thee in ringing the bells of the Church. Grant that we may never forget the sacredness of Thy House, nor profane it by thoughtlessness or irreverence, but make us ever mindful that when we ring the bells, we ring for Thy honour and glory; through Jesus Christ Our Lord.